September 11, 2011 - video contains the voices of students and faculty, reading their thoughts on that day based on an image they chose as an inspiration... powerful.

The Weiner High School Gifted and Talented Program and the Weiner E.A.S.T. Program sponsored a 9-11 Remembrance Assembly for students and the community.  The service was held Friday, September 9th, at 1:30 PM in the school cafetorium.

The program began with a moving video prepared by the New York City Police Department which showed scenes from that day.  The video was set to music and presented a troubling, but moving look back at the events of that day.  Following the video, Harrisburg High School senior cadets under the direction of David Mullins, presented two memorial flags; one flag, called the Flag of Honor, contained the names of all those who perished at the World Trade Center, the Pentagon, and on United Flight 93 –the other flag, called the Flag of Heroes, contained the names of all the first responders who died that day trying to save others.  The presentation of the flags was done in silence and concluded with a flag folding.  Each flag was presented to a representative of the student body.

Next a moving presentation called “Thoughts and Questions” was shown.  The video contained student and teacher authored poems/free verse based on individually selected images.   Those viewing the video saw the images and heard the recorded voice of the author with Barber’s “Adagio for Strings” playing in the background.   This was followed by a minute of silence to remember those who lost their lives.

Jessi H.  then recited Charlotte Delbo’s poem, “Do Something With Your Life.”  Delbo was a survivor of the Holocaust and wrote for those who did not survive, giving them a voice and a message to the living.  One of the lines states:  “Do something with your life –for it would be too senseless after all, for so many to have died, while you live –doing nothing with your life.”

The program ended with a video of the various memorials that have been built in our nation to honor those who lost their lives.  It showcased the new memorial that opened in  New York City this past weekend. 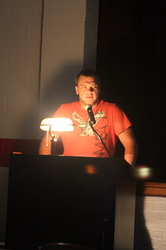 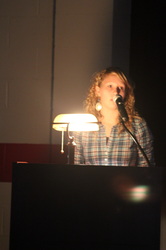 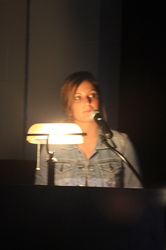 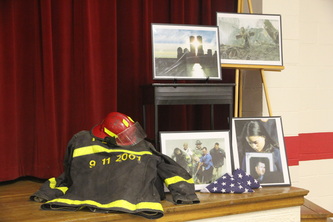 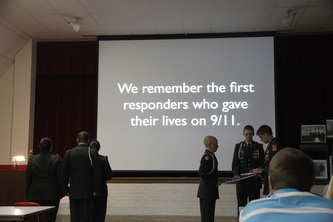